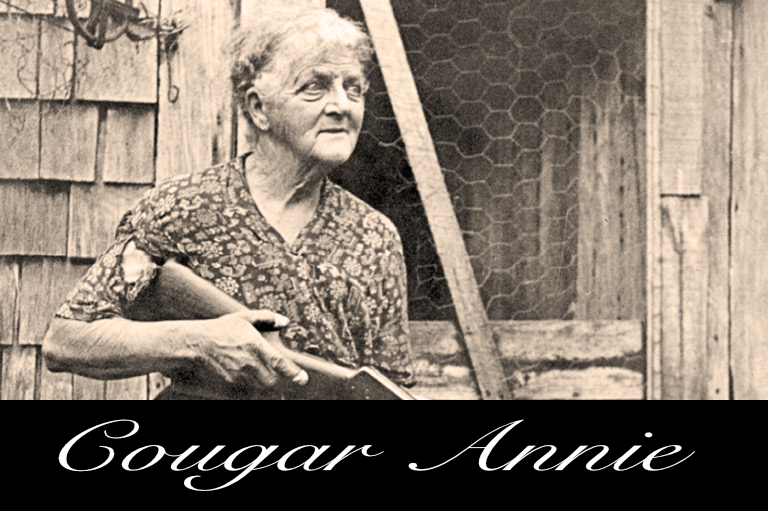 Cougar Annie is a legend around Claquat Sound, British Columbia. She is a true pioneer of some of Canada's most harsh lands and she is known for her perseverance as well as the mysteries behind her husbands disappearances. Some of the legends surrounding her can be thought of as larger then life and script worthy for sure. She is born by the name Ada Annie Rae-Arthur of Sacramento, California. She married Willie Rea-Arthur of Glasgow, Scotland. After A few years the family of Willie had discovered the addictions he had accumulated, alcohol and opium being his favourite. The family, who were quite prominent, figured the only option was to banish him to then, the far reaches of the earth, Boats Basin, British Columbia. Now out of the sight of friends of the family and the press, they would send small amount of remittance to keep him there. He was a complete embarrassment. Ada, being the wife in those days followed her husband.

When they arrived on the coast of British Columbia they had three small children, an income with little hope to remain in this harsh land north of Tofino. The land is rocky, heavily bashed by waves and weather. With nothing to slow or stop it all year round. In fact the priest, Father Augustan Brabant, whom visited the family frequently gave this description; - "The coast is rugged and rocky, presenting in its entire extent the appearance of desolation and barrenness, no clear land is to be seen anywhere, and no hopes can be entertained that the west coast of Vancouver Island will ever be available for agricultural settlements." Ada, who was not unfamiliar with difficulties thought of this as a new beginning for herself and her children. Determined to make it work!

As time passed, the family grew by five more children and they had carved out a modest homestead, a two hectare garden and a mail order nursery business. Willie was not a labourer, he rather watch the children and tend to the house. It seemed to work quite well as Annie was not worried about manual labour at all.

In 1936 Willie had passed. He had drowned. Many had expected Annie to move from the hard wilderness homestead and take up another life somewhere more likened to the life style of a woman. She did quite the opposite. She was determined to make the homestead work. She immediately took out ads in news papers and farmers magazines; -"BC widow with nursery and orchard wishes partner. Object matrimony" she wrote in an ad.

Annie had married three more times. Her second husband had passed by accidentally shooting himself in the foot, then scrumming to infection. The third, contracted pneumonia. The fourth, she chased off at gun point when he tried to push her off a cliff!

The children all grew up on the homestead under a heavy regime of chores and discipline, then headed for town when they grew old enough to fend for them selves. Annie continued to live there till she passed at the age of 96. Annie had continued to work the farm, mail order nursery and picked up the local postmaster position as well. How she was tagged with the name Cougar Annie was an amazing story not of her own. She had managed to shoot and kill several cougars, as it was an income at the time. A reward of $10-$20 for each brought in. It is told she has shot no fewer then eighty bears and sixty-two cougars!

Cougar Annies Garden is still operational today and is accessible by float plane or a small boat that carries tourists across. The locals of Tofino have also put on musicals and plays about Annie. She is a memorable woman and deserves mention. If you are ever out Tofino way inquire about Cougar Annie. People have many stories to tell about this lady of the north!